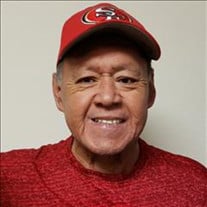 Raymond Delgado Perez, 63, of Kingsburg, California passed away unexpectedly on December 15, 2020 due to complications during surgery. Raymond was born in Fresno, California to Jessie and Catalina Perez. He grew up in Sanger, California and graduated from Sanger High School in 1975. Raymond held several jobs including ranch hand at Giffins Ranch and a manager at Me-n-Eds Pizza Parlour. Raymond spent the rest of his career as a skilled laborer at Guardian Industries in Reedley, producing, inspecting and delivering various glass products. In 1986, Raymond married Rita Lopez. They began the next chapter of their life in Kingsburg, having their only son, Daniel in 1988. Raymond suffered through various medical issues in the last years of his life. However, he was always in high spirits and was a positive figure in many lives through difficult times. Raymond loved spending time with his family; especially his three grandchildren. Raymond also loved to pass the time watching old Westerns and various shows from his childhood, but was always eager to watch his favorite team, The San Francisco 49ers. Raymond is survived by his wife of 34 years, Rita Perez, his son Daniel and daughter-in-law, Patricia and three grandchildren Emily, Ethan and Emmett. Raymond is also survived by his brother Jessie Perez Jr., and several Nieces and Nephews. He was preceded in death by his parents, Jessie and Catalina Perez, sister Vida Cortez and brothers Joe Perez and Robert Perez. Viewing will be held 2:00 PM - 6:00 PM Monday, December 28th, 2020 at Salser & Dillard Creighton Chapel, 1588 Lincoln Street, Kingsburg. A Mass of Christian Burial services will be held 11:00 AM Tuesday, December 29th, 2020 at Holy Family Catholic Church, 1275 Smith Street, Kingsburg immediately followed by interment at the Kingsburg Cemetery, 12782 E. Clarkson Avenue, Kingsburg. Services have been entrusted to Salser & Dillard Creighton Chapel. Memorial Tributes and condolences may be offered by logging onto www.salseranddillard.com.

Raymond Delgado Perez, 63, of Kingsburg, California passed away unexpectedly on December 15, 2020 due to complications during surgery. Raymond was born in Fresno, California to Jessie and Catalina Perez. He grew up in Sanger, California and... View Obituary & Service Information

The family of Raymond D. Perez created this Life Tributes page to make it easy to share your memories.

Send flowers to the Perez family.