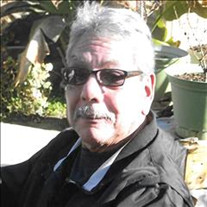 Ruiz, Richard Sr "Richie" March 6, 1954-August 21, 2019 Richard was born in Fresno, California March 6, 1954 to Frank and Emily Ruiz. Richard was the youngest of 8 children. Richard was a beloved father, brother, Papa, and friend. He grew up in Kingsburg California and was known for being a talented drummer, a track and field phenomenon in his earlier years, and just an all around amazing person loved by all. Richard was a very dedicated worker and right out of high school began his career as a phone operator with Pacific Bell. After a short while, he moved up to the position of lineman. Through years of hard work Richard became an expert in his field and earned a promotion to lineman supervisor. Pacific Bell merged with AT&T and during this transition Richard took on a new challenge as the supervisor of the crews implementing the roll out of AT&T U-verse throughout the valley. Richard had a successful career with AT&T for over 39 years and then he happily retired. Richard lived life to the fullest. He enjoyed playing music, hanging out with friends and family, fishing with his son and brothers, and playing pool, shuffle board, and darts. Everyone in the family knew that they could drop by Richard's house at any time to hang out and have fun. His house was a second home to many. Richard was a Papa to 9 beautiful grandchildren. He adored all of his grandchildren and always greeted them with a huge hug and kiss and a "Who loves you? That's right Papa!" Preceding him in death are his father and mother Frank and Emily Ruiz, and his 2 brothers, David and Harold Ruiz. He will be forever remembered by his children Jeremiah Jones, Richie Ruiz, Amber Vaquera, and Ashley Rivera; his siblings Jeannette Demay, Diane Jones, Frank Ruiz, DeeDee Kezirian, and Stan Ruiz; his girlfriend Sandy Medley; the mother of his children Pamela Jones. Richard will also be fondly remembered by his grandchildren, Elijah Ruiz, Anastasia (Stasia) Galindo, Jayden Galindo, Nevaeh Jones, Kaytlyn Jones, Sophie Vaquera, David Rivera, Alexander Vaquera, and Victoria Rivera; by his numerous nieces, nephews and extended family and friends. A visitation for friends and family will be available on Thursday, August 29, 2019 from 5:00 P.M. to 7:00 P.M. at Holy Family Catholic Church, 1275 Smith St, Kingsburg CA 93631 with a Rosary Service to commence immediately following. A Mass of Christian Burial will be celebrated in memory of Richard on Friday, August 30, at 9:30 A.M., at Holy Family Catholic Church. Interment will follow at the Kingsburg Cemetery located at 12782 E Clarkson Ave, Kingsburg CA 93631. Following the interment, the family would like to invite you back to the Holy Family Catholic Church Hall for food and refreshments. In lieu of flowers or food the family prefers to have money donated via check to Kingsburg High School and please make notation in the memo field "In Memory of Richie Ruiz". At the direction of the Family, proceeds will be evenly split between the KHS Music Department and the KHS Track Program in order to give back to the programs that Richie and Stan loved so much.

Ruiz, Richard Sr "Richie" March 6, 1954-August 21, 2019 Richard was born in Fresno, California March 6, 1954 to Frank and Emily Ruiz. Richard was the youngest of 8 children. Richard was a beloved father, brother, Papa, and friend. He grew up... View Obituary & Service Information

The family of Richard Gerard Ruiz, Sr. created this Life Tributes page to make it easy to share your memories.

Send flowers to the Ruiz family.