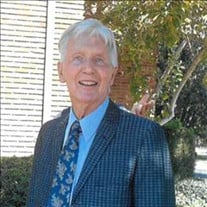 Robert Douglas Burton was born on July 3, 1932 to Perry and Nancy (McCulley) Burton in Redlands, CA. He passed away from this life on February 15, 2021. As a young boy, he loved hunting with his grandfather in Utah. His grandparents and Aunt were a key role to making him the man he would become. He loved the art of photography, taking beautiful pictures of outdoor scenery and developing black and white photos himself. He was introduced to a beautiful young lady named Phyllis Pope by her cousin Harold Kirk, while he was serving in the military. They dated for several years as he attended Cal Poly Pamona. Once he received his degree, they married on November 24, 1959 in San Bernardino, CA. They moved to Hollister, CA in 1962 and started their family. They had 2 children; Jeffrey Harold Burton (born 1962) and Lynda Lorraine (Burton) McKinley (born 1966). He worked hard to provide for his family. He was quality Control Manager at Smuckers in Salinas, CA for several years. He then moved the family to Kingsburg, CA in 1985 and became the Quality Control Manager at Sun Maid Raisins. After retirement, he spent his time with his wife at their cabin in Shaver Lake; reading, hiking, and canoeing. He loved elephants due to their intelligence and family unity, which were key traits for himself. He was quite the conversationalist with family, friends, and even complete strangers. Sadly, he lost his wife after 55 years of marriage on August 25, 2015. He is survived by his son and daughter, Jeff Burton and Lynda McKinley. There will be a Celebration of Life service on March 6, 2021 at 11:00 a.m. in Kingsburg, CA at Salser and Dillard Creighton Chapel, 1588 Lincoln St. In lieu of flowers, please contribute your donations to The Elephant Sanctuary, 27 East Main St. / P.O. Box 393 Hohenwalt, TN 38462.

Robert Douglas Burton was born on July 3, 1932 to Perry and Nancy (McCulley) Burton in Redlands, CA. He passed away from this life on February 15, 2021. As a young boy, he loved hunting with his grandfather in Utah. His grandparents and Aunt... View Obituary & Service Information

The family of Robert "Doug" Burton created this Life Tributes page to make it easy to share your memories.

Send flowers to the Burton family.