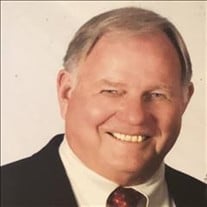 Robert (Bob) George Erickson went to be with the Lord on September 8, 2021. He died peacefully, surrounded by loving family. Robert was born to George and Edna Erickson on March 28, 1937. He grew up in Kingsburg and enjoyed a playful childhood with his twin brother, Richard, cousins and many childhood friends. Robert attended Kingsburg High School where he was a proud Viking, graduating with the Class of 1956. He played football and was part of the 1956 Central Valley Championship team. Bob went on to attend Reedley College. During his years at Reedley College, he met his lovely wife, Janice. The couple were soon married and had three little girls, Kathryn, Caroline and Christine. They made their home in Kingsburg and were married for 63 years. Bob spent many wonderful years working locally in the family business with his father. They owned Erickson Music and Appliance Center in Kingsburg. Bob later opened Erickson Piano and Organ Center in Fresno. Bob enjoyed many hobbies which included trains and model train collecting, playing the organ, furniture refinishing and gardening. He was an avid San Francisco Giant's fan. Go Giants! Bob and Janice enjoyed the Fresno Philharmonic where they met lifelong friends. Throughout the years, Bob was also involved in community activities. He was being a proud member of Kingsburg Y's Men and Kingsburg Rotary. Robert was preceded in death by his wife, Janice and daughter Christine Fukano. He is survived by his daughters Kathryn Greer and Caroline Behymer, two son in laws, Kim Williams and Richard Fukano. He is also survived by five grandchildren, Karly Ann, Grant, Noelle, Jackson and Allison, one great granddaughter, Elizabeth. He is also survived by his twin brother, Richard. Big Bob, as many folks called him, will be greatly missed. He was a loving and caring husband, father, grandpa and friend to many. Services have been entrusted to Salser & Dillard Creighton Chapel. Memorial Tributes and condolences may be offered by logging onto www.salseranddillard.com.

Robert (Bob) George Erickson went to be with the Lord on September 8, 2021. He died peacefully, surrounded by loving family. Robert was born to George and Edna Erickson on March 28, 1937. He grew up in Kingsburg and enjoyed a playful childhood... View Obituary & Service Information

The family of Robert George Erickson created this Life Tributes page to make it easy to share your memories.

Robert (Bob) George Erickson went to be with the Lord on September...

Send flowers to the Erickson family.