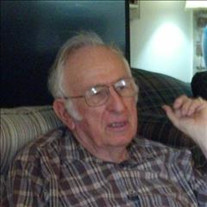 Robert Neal Maier (Bob) was born October 9th, 1927 in Selma Sanatorium, CA to Elma Margaret Jensen and Emmanuel Nathaniel Maier. He passed away quietly at the age of 92 on April 20th, 2020 in the loving atmosphere of Country Care Home Assisted Living in Selma, CA. Bob was a gentleman in every aspect of the word, kind to all he met, and intelligent beyond belief. He knew true hardship in his early years. Bob was an only child and when his father became ill due to a stroke, he left college to come home and provide for his parents until they passed. He continued the family farm and found additional employment as a proud supervisor at Del Monte Canary where he worked for 38 years. At age 52, he married for the first time the love of his life, Hazel K. Wright. At that time Bob inherited 4 adult children and their spouses, Earl Wright (Vicki), Katherine Ruiz (Frank), Alan Wright (Annette), and Larry Wright (Marilyn). Over the years, Bob was blessed with 8 grandchildren, 17 great grandchildren, and 4 great great grandchildren whom he loved and adored. He was a true patriarch and gift to his family. Bob had endless amounts of stories to tell that were truly captivating by all those who knew him. Bob was a man of God and didn't miss church unless absolutely necessary. During his younger years, he was a youth minister at Sugar Pines Christian Camps. He attended First Baptist Church in Selma, CA and was an active member. During auctions to raise money for the church, he was known to bid over $300 on just one of Marie Manley's famous lemon pies. He sure enjoyed his sweets and would hand out boxes of See's Candies during Christmas time, not wanting to share his own. Bob's death will be felt by all those who knew and loved him. He now rests at home with Jesus, Hazel, two of his children, and his parents which was his last wish on earth. A Graveside services will be held at 11:00 AM Monday, April 27th, 2020, at the Kingsburg Cemetery, 12782 E. Clarkson Avenue, Kingsburg. Services have been entrusted to Salser & Dillard Creighton Chapel. Memorial Tributes and condolences may be offered by logging onto www.salseranddillard.com.

The family of Robert N. Maier created this Life Tributes page to make it easy to share your memories.

Send flowers to the Maier family.