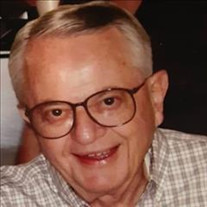 Ronald Charles Baker was born on August 1, 1933, in Selma CA, where he spent his childhood and graduated from Selma High in 1951. Afterward, he attended Reedley College for two years while working at Libby's Cannery, and was able to attend the University of Southern California where he earned his Doctorate of Pharmacy in 1956. This was one of the proudest accomplishments in his life. His passion and pride for being a USC Trojan was known by everyone...including his friends who attended UCLA and Cal. It was in Pharmacy school that Ron met Mary Lynne Elliott, his future wife and the love of his life...on a blind date no less. Mary Lynne was attending Bishop Johnson College of Nursing. Ron and Mary Lynne were married on September 8, 1957 and after graduating they moved to Fresno in 1958 and then to Selma. They would spend the next 58 years together in Selma, raising their three children. In Selma, Ron worked at Selma Drug Store as a Pharmacist and eventually was able to purchase the store in 1972 from John Patterson. He quickly became a pillar of the community and many have fond memories of Mr. Baker behind the soda counter. Ron's tenacious work ethic led him to filling over 1 million prescriptions over the course of his career. In 1990, he sold the drug store and worked for Fox Drug Store until he "semi-retired." He continued to work behind the counter until his death. Ron had many joys in life, the greatest of which were his grandchildren and telling anyone who would listen of their accomplishments. Ron was also passionate about his garden and gave out vegetables from the trunk of his car after church each Sunday. Many a family dinner was embellished with Papa's veggies. His favorite activity was fishing at Shaver Lake with his dear friend Jim Stephenson and often his son and gradnsons. Ron was an active member of Monmouth Community Presbyterian Church, held offices in the Selma Masonic Lodge, Fresno Scottish Rite, was elected Potentate of Shriners in 2001 and participated in many other fraternal organizations throughout the years. Ron was preceded in death by his father, Claude Baker, his mother Ila Baker and his wife Mary Lynne. He is survived by his three children: Leslie Howard and husband Donald of Clovis, CA. and their three children, Elizabeth, Kathlynn, and Daniel; Jon Baker and his wife Deborah of Rancho Cucamonga, CA and their children Ted and Megan; and Kimberly Petree and her husband Rick of Selma, CA and their three children, Ashley, Lauren, and Taylor. A Celebration of life will be held at Fresno Shrine Center, 5407 E. Olive Ave Fresno, Ca on Saturday August 14th at 11:00AM. In lieu of flowers, remembrances may be sent to Monmouth Community Presbyterian Church at p.o. box 1110, Selma, CA 93662 or Shriners Hospital for Children Northern California 2425 Stockton Blvd., Sacramento, CA, or Scottish Rite Childhood Language Center 1455 L Street, Fresno, CA 93721 Services have been entrusted to Salser & Dillard Creighton Chapel. Memorial Tributes and condolences may be offered by logging onto www.salseranddillard.com.

Ronald Charles Baker was born on August 1, 1933, in Selma CA, where he spent his childhood and graduated from Selma High in 1951. Afterward, he attended Reedley College for two years while working at Libby's Cannery, and was able to attend... View Obituary & Service Information

The family of Ronald Charles Baker created this Life Tributes page to make it easy to share your memories.

Send flowers to the Baker family.