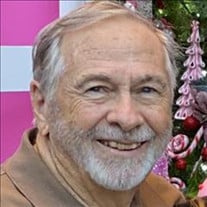 Ronald Gene Snedegar April 3, 1943 - April 29, 2022 Ronald Gene Snedegar, 79 of Kingsburg, California, died on Friday, April 29, 2022, in Kingsburg, California. Ronald was born to Cedric Nutter Snedegar and Freddy Lanham on April 3, 1943 in East Rainelle, West Virginia. Ronald Snedegar grew up in West Virginia and aspired to become a race car driver. His dream was put on hold after a bad car accident, so he switched gears and became an accomplished civil engineer, working almost 30 years with Black and Veatch, an international engineering firm. He was also an active and decorated leader in the Boy Scouts of America throughout Maryland, California, and Nevada, and was awarded the Silver Beaver Award. His sons, Robert and Ryan, rose to Eagle Scout under his guidance. In 1999 he was diagnosed with a tumor in his heart, which required open heart surgery. While in surgery he had a stroke, leaving him paralyzed on the right side. "That's when my second life began," he recalled. Ron spent months in rehabilitation, not just learning to walk and talk again, but discovering things like what a toothbrush is used for and how to comb his hair. Through that process he developed an ironic sense of humor. "Since I didn't recognize my razor, I just grew a beard." His therapists told him that he was one of the worst cases they had ever encountered and doubted his chance for recovering his ability to speak or use his right hand. After months and years of work, his speaking ability returned. He knew his work was not done and continued the therapy exercises long after the sessions ended. "My hand is coming along fine," he said a few months ago, more than 20 years after the stroke. Two years after the surgery and stroke, he joined the Stroke Peer Visitor Program, counseling stroke victims in Las Vegas. He also returned to his volunteer work with the Boy Scouts as an administrative volunteer. His physical limitations did not stop him from an active life. "Stroke patients are encouraged to go out every day. So, my wife and I ate out�. a LOT." He and his wife Loretta traveled and often visited their sons in Northern California and Texas. In addition to Boy Scouts, his active volunteer life included: High Sierra Trail Crew, Master Gardeners, many hours at the Kingsburg Historical Park and great enjoyment singing in the choir at Kingsburg Community Church. Ron passed away April 29, 2022. He is survived by Loretta, his wife of over 50 years, his two sons, Robert and Ryan, daughter-in-law Beth, four grandchildren, Mina, Brandon, Wesley and Rhiannon, brother Larry, and sister Barbara, and many other family and friends. Celebration of life will be 10am, June 11 at the Kingsburg Historical Park. Those who so desire may make a memorial donation in memory of Ron to Kingsburg Community Church, Kingsburg Historical Park, Boy Scouts of America, or your favorite charity. Services have been entrusted to Salser & Dillard Creighton Chapel. Memorial Tributes and condolences may be offered by logging onto www.salseranddillard.com.

The family of Ronald Gene Snedegar created this Life Tributes page to make it easy to share your memories.

Send flowers to the Snedegar family.