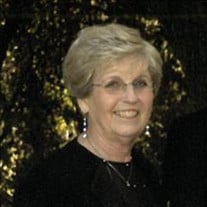 Ruby Jane Arnst went home to be with her Lord and Savior on January 15, 2021, at the age of 94. She was born to Fred and Anna Keiser in Parlier, California on December 2, 1926. Fred and Anna were German immigrants from Russia's Volga region, and arrived in the United States in the early 1900's. Ruby was one of eight children. She was preceded in death by her parents, and siblings Henry Keiser, Mary Gore, Fred Keiser, Leo Keiser, Ann Pearson, Edward Keiser and Louise Boyd. Also preceding her was her beloved husband of 68 years, Lawrence Arnst, the love of her life. Ruby grew up on farms in the Parlier area. Even though she was the baby of the family, she learned at an early age to work along with her parents to help support her family. She attended Parlier schools, and graduated from Parlier High School in 1944. The next year, she graduated from cosmetology school and became a beautician. It was while she was attending that school, that she was introduced to Lawrence, by his sister Evelyn. She took him to the family home, and the moment Lawrence saw the pretty blonde, it was love at first sight. Lawrence and Ruby were married in Reno, Nevada, on October 24, 1945. They started farming and had their son, Ken in 1946. Five years later, their daughter Gayle was born. They moved their family to Selma, and later to Kingsburg, and became "city" farmers. Ruby's life was forever changed when a neighbor came to their home, when she was a little girl, and invited her and her sister to Sunday School in a little church in Parlier. For years, the neighbor took them to church, and as a young girl she accepted Jesus Christ as her Savior. Through the years, Lawrence and Ruby served Christ in many different churches. Ruby was baptized in her twenties at Pella Lutheran in Selma, California, and made a commitment to Christ that she followed the remainder of her long life on earth. They also were members of the Kingsburg Covenant Church, where Ruby continued to be on a team of women who planned and decorated the church and special events. She had a God-given ability to see how simple things could be used to glorify God, and loved decorating with her friends for many years. We will always remember Ruby as a caring mother, grandmother and great-grandmother who loved unconditionally and adored her family and her Lord all the days of her life. She and Lawrence were role models of a loving marriage and were family leaders who forever transformed our lives and our hearts by their example. Ruby is survived by her son Ken Arnst and his wife Sandy, and daughter Gayle Willems and her husband Paul. She is also survived by her grandchildren Christian Arnst, Todd Arnst, Katie Arnst, Gregory Willems, Peter Willems, Matt Willems, and twelve precious great-grandchildren. We wish to thank Sierra View Homes, 1155 E. Springfield Avenue, Reedley, California, for their compassionate care of our parents. All remembrances may be made to them in Ruby's memory. Funeral services will be held privately. Services have been entrusted to Salser & Dillard Creighton Chapel. Memorial Tributes and condolences may be offered by logging onto www.salseranddillard.com.

Ruby Jane Arnst went home to be with her Lord and Savior on January 15, 2021, at the age of 94. She was born to Fred and Anna Keiser in Parlier, California on December 2, 1926. Fred and Anna were German immigrants from Russia's Volga region,... View Obituary & Service Information

The family of Ruby Jane Arnst created this Life Tributes page to make it easy to share your memories.

Ruby Jane Arnst went home to be with her Lord and Savior on January...

Send flowers to the Arnst family.