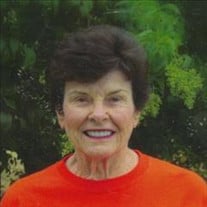 Shirley Ann Gustafson passed away at home on April 26, 2021. She was born on August 21, 1935 in Detroit, Michigan to Rocco and Gilda Valenti. She moved to California when she was a toddler where she lived with her grandparents until her parents also came to California a few years latter to enjoy the good life in the Kingsburg area. She attended Clay Grammar School, Kingsburg High School, and graduated from Fresno State College with a BA degree in Physical Education. Her first teaching job was at Parlier High School, but the chance to once again be a Vikings at Kingsburg High School, soon had her joining the faculty at her alma mater in 1958. She enjoyed her time there with so many students who became her life long friends, but in 1968 she couldn't say no to the opportunity to teach on the Junior College level. She became a teacher at Reedley College, from 1968-1994, where she was a physical education teacher as well as Volleyball Head Coach for 22 years. Some of Shirley's best memories are of the years she and Duane spent traveling with the Volleyball team girls to their varius games and tournaments. While at Reedley College she received the honors of being inducted into the Reedley College Tiger Hall of FAme, and the California Community College Women's Volleyball Coaches Association Hall of Fame. Shirley won many beauty pageants in her younger years, making it necessary for Duane, who later became her husband, to keep a close eye on her while they were dating! She and Duane were sweethearts in high school where she cheered him on as a cheerleader at all his sporting events. They were married in 1957 and would have been celebrating their 64th anniversary in June. Shirley is survived by her husband Duane, brother-in-law Gary Gustafson and his special friend Greta Williams, sister-in-law Glenda Oliver and her husband Jim, and many nieces, nephews and cousins that were all very special to her. She was preceded in death by her brother Richard Valenti. God Bless you Shirley for all the time you dedicated to young people during your life time while teaching and coaching. Many of them became a better person because you believed in them, and worked hard encouraging them to believe in themselves. You may not have had children of your own, but you were more than a mom to so many students over the years! Viewing will be held 3:00 PM - 6:00 PM Monday, May 3rd, 2021 at Salser & Dillard Creighton Chapel, 1588 Lincoln Street, Kingsburg. A Memorial luncheon and a Celebration of Shirley's life will be held at 11:00 AM Tuesday, May 4th, 2021 at Kingsburg Historical Park, 2321 Sierra Street, Kingsburg. Donations can be made in Shirley's memory to the Reedley College Foundation scholarship program to benefit her existing scholarship of many years. Please make your checks payable to: Reedley College Foundation, and mail them to P.O. Box 227, Reedley, Ca 93654. Please write on the memo line: Shirley Gustafson. Services have been entrusted to Salser & Dillard Creighton Chapel. Memorial Tributes and condolences may be offered by logging onto www.salseranddillard.com.

Shirley Ann Gustafson passed away at home on April 26, 2021. She was born on August 21, 1935 in Detroit, Michigan to Rocco and Gilda Valenti. She moved to California when she was a toddler where she lived with her grandparents until her parents... View Obituary & Service Information

The family of Shirley A. Gustafson created this Life Tributes page to make it easy to share your memories.

Send flowers to the Gustafson family.