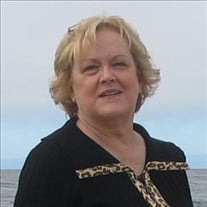 Susan Jane was born in Pine River, MN on May 30th, 1944 as the fifth child of farmer Clifford and Dorothy Anderson. Her siblings were brothers Cliff Jr and Richard followed by sisters Gayle and Bobby. Bobby remembers, at the age of nine, the joy of having a baby sister. Three years later Cliff Senior moved the family to Omaha so Cliff could attend Grace Bible Institute. After graduation, Janie became a missionary kid in the back hills of Kentucky where Cliff Sr served with the Evangelical Free Church's home missions. From there, with all her older siblings having moved out of the house, the family of three moved to pastorates at Newman Grove and then Newfolden, MN. Bobbie was thankful to have her parents a mere 19 miles away from her life in Thief River Falls. Janie was involved in the Newfolden High School choir. By the early 1960's, she enrolled at her father's alma mater in Omaha. From there she worked on the Billy Graham Evangelistic Association's Decision publication in Minneapolis. It was there she met and fell in love with Wayne Hauser. They were married in the late 1960's and the two served numerous churches before serving in Watertown, MN. In the late 70's Jane got her passport and flew to Korea where she adopted a boy Wayne and Jane named Clifford. Her sister Gayle's family met Jane's plane for a layover in San Francisco. Her nephew Mark was amazed at how many scrambled eggs his new cousin could eat! His body must have craved the protein. Shortly thereafter, the family of three moved to Exeter, California where Wayne accepted the pastorate at the Baptist Church. Those were wonderful years for the family. She was able to support Wayne with her amazing hostess skills, her parents, brothers, and their families were close by in Kingsburg, and Clifford would ride his trike to school parking at a garage. The family then moved to Visalia where Jane completed librarian training and served in the local school system. They dove deeply into church life at Parkside Chapel where they loved and were loved. After Wayne's passing in 2019, Jane sold the house and moved to Sierra View Homes Retirement Community in Reedley. A little after midnight on July 23rd, 2020, Jane graduated from this earthly life after suffering a severe stroke a few months earlier. Jane is survived by son Clifford Hauser of Visalia, sisters Gayle McCutchan of Reedley, Bobby Trontvet of Grand Forks, ND and Sister-in-law Anita Anderson of Kingsburg and numerous nephews, nieces, their spouses and children. A Celebration of Jane's life will be held 9am Saturday, August 1st, 2020 at Parkside Chapel, 3200 E. Walnut Ave., Visalia; with a Graveside service to follow 9am Monday, August 3rd, 2020 at Kingsburg Cemetery, 12782 E. Clarkson Avenue, Kingsburg. In lieu of flowers, donations can be made to the Parkside Chapel Women's Ministry in which Janie served. The ladies will then choose how to best invest the funds in Jane's memory. Send funds to: Parkside Chapel 3200 E. Walnut Ave. Visalia, CA 93292 Memo: "In memory of Jane" For more information, contact Sharon Alexander at the church 559-734-3775 Services have been entrusted to Salser & Dillard Creighton Chapel. Memorial Tributes and condolences may be offered by logging onto www.salseranddillard.com.

Susan Jane was born in Pine River, MN on May 30th, 1944 as the fifth child of farmer Clifford and Dorothy Anderson. Her siblings were brothers Cliff Jr and Richard followed by sisters Gayle and Bobby. Bobby remembers, at the age of nine, the... View Obituary & Service Information

The family of Susan Jane Hauser created this Life Tributes page to make it easy to share your memories.

Send flowers to the Hauser family.