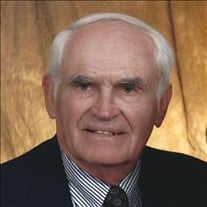 Obituary for TC Moshier November 23, 1931 - October 23, 2021 After a life well lived, TC Moshier, 89, entered his heavenly home on Saturday, October 23, 2021, surrounded by his family. The second of four children,TC was born to Earnest and Winnie Moshier on November 23, 1931 in a small two-room house, with no indoor plumbing or electricity, in rural Lula, Oklahoma. Starting school at the age of four in a one-room schoolhouse, studying by the light of a kerosene lamp, he graduated in 1948 from high school at the age of 16, among a class of 8 students. Growing up on a family farm, he knew what it meant to work hard and developed keen problem solving skills, both of which served him well throughout his life and career. TC graduated from East Central State College in Ada, Oklahoma in 1952. After college, he proudly served his country in the United States Navy as a machinist for four years. Upon being discharged from the Navy, he followed his parents and made his home in Reedley, California. He continued his education at Fresno State College, earning a Masters Degree in Education Administration. In August 1959, he married Carolyn Just, and together they established their life in the country east of Kingsburg in a home he and his dad built. He later built the family home across the road from Kings River Golf and Country Club where they lived for 48 years, raising their family and making many wonderful memories. Following his Navy training, TC worked as a machinist at Salwasser Manufacturing, until later moving into education, a career path that he would follow until his retirement. He was at Traver Elementary for 10 years where he taught 8th grade, coached, and eventually became the Principal/Superintendent. He then spent the next 26 years as the Principal/Superintendent of Kings River Union Elementary School, which, under his leadership, became a California Distinguished School. TC loved his students and staff and took great pride in all of their accomplishments in school and beyond. TC actively served his community and his church throughout his life. He was a faithful member of the Church of Christ where he attended regularly and supported youth and sports ministries. He was a charter member of the Kingsburg Rotary club, having perfect attendance for over 50 years. Devoted to building opportunities for children in youth sports, he started the Kingsburg Rotary Basketball Tournament in 1969 and was the tournament director for 50 years. In 1974, he established the Kings River Junior Golf Tournament, which continues to this day. TC loved golf, basketball, softball, track, waterskiing, traveling, camping, backpacking, farming, landscaping, remodeling, and automotive projects. He enjoyed spending time with his friends and family, attending athletic events, and supporting his children and grandchildren in all their activities. He is preceded in death by his parents and by his daughter Carol Moshier (1974). TC is survived by Carolyn, his wife of 62 years, his children and their spouses: Tom Moshier (Stefanie), Julie Joseph (Mark), Jim Moshier (Jennifer), Kimberly Moshier (Michelle Bolt) and his nine grandchildren: Tobin Moshier; Alyssa, Caden, and Mason Joseph; Kylea, Kiersten, Konnor, Kalista, and Kamille Moshier; his brothers Charles and Kenneth Moshier and his sister Rhea Jeane Parks Hester. All who knew TC, recognized he was one of a kind. He never met a stranger, was a consummate storyteller, and had a memory that could not be rivaled. He lived each day to the fullest and remained active until his final days. His legacy lives on through his family and in the numerous lives he touched. Visitation will be held at Salser and Dillard Creighton Chapel in Kingsburg from 4 - 6 p.m. on Friday, October 29. A graveside service will be held Saturday, October 30 at 9 a.m. at the Reedley Cemetery followed by a memorial service at 10 a.m. in the Immanuel Schools Chapel at 1128 S. Reed Ave. in Reedley. Remembrances may be made to: Kingsburg Rotary Club TC Moshier Memorial 1467 Smith Street Kingsburg, CA 93631 Immanuel High School 1128 S. Reed Ave Reedley, CA 93654

Obituary for TC Moshier November 23, 1931 - October 23, 2021 After a life well lived, TC Moshier, 89, entered his heavenly home on Saturday, October 23, 2021, surrounded by his family. The second of four children,TC was born to Earnest and... View Obituary & Service Information

The family of TC Moshier created this Life Tributes page to make it easy to share your memories.

Send flowers to the Moshier family.