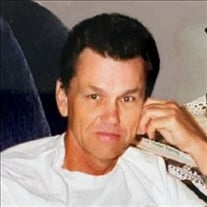 Terry Clarence Hillblom Terry Hillblom passed away on September 6, 2021 in the ICU of the Community Regional Medical Center, in Fresno, after battling the COVID-19 virus for over a month. Terry was born in the small, rural town of Kingsburg, CA., in October of 1946, to Helen Hillblom. His father, Clarence Hillblom had passed away from heat prostration a few months prior to Terry's birth. In 1948, Helen married Clarence Andrew Anderson, a close family friend; and, "Andy" became the father Terry knew and loved all his remaining years. Terry learned the meaning of hard work during his formative years, working on the family farm alongside his brothers, Larry and Grant. Terry was very proud of his upbringing and life in the "Swedish Village," among his many school friends and family. After graduating from Kingsburg High School, Class of 1964, Terry attended Reedley Junior College; then went on to the University of Oklahoma, in Durant, where he graduated with a B.S. degree in Aeronautics. He achieved his dream of becoming a pilot in the late 1960s. Terry flew for Swift Aire, San Luis Obispo; for Air Polynesia, Honolulu; and Alaska Central Air, Fairbanks, throughout his flying career. In addition, Terry was a flight instructor on Kodiak Island. He loved teaching students to fly! These were happy times for Terry; and, in 1976, in Fairbanks, he married his wife, Sandra, in an outdoor wedding. Terry's flying days ended with the onset of Type I Diabetes in 1977. In 1978, he went into aviation management with Arctic Circle Air. In 1979, he joined his brother, Larry Hillblom, in the development of DHL Island Airways, which transported cargo throughout the Hawaiian Islands. In 1988, Terry chose to take another career path, and enrolled at San Joaquin School of Law. He earned his law degree in 1991; passed the California State Bar; and became a practicing attorney, with the Mastagni, Holstedt & Ferrari Law Firm, in Fresno, CA, all in that same year. In 1995, Terry's brother, Larry, a co-founder of DHL Worldwide Express, died in a plane crash. By the year 2000, the Larry L. Hillblom Foundation, Inc. was established. Terry left the law firm to join the Foundation, actively engaging in implementing Larry's wishes. He took on the position of Executive Vice President; and served as Chairman of the Foundation's Sub-Committee on Diabetes Research. He also sat on the Kingsburg Neighborhood Grant Committee, which his brother, Grant, chairs. Terry found great satisfaction in these roles through the remainder of his life. Terry is survived by his spouse of 45 years, Sandra Hillblom; his children Kimberly and son-in-law, Dale Burr, Christopher Hillblom; grandchildren Mike Leon, Kassandra Leon, Alex Murrieta, Ryan Hillblom, Bethany Bassan; great-grandchildren Baylen Leon, Atticus Forney, Milah Bassan; brother Grant Anderson, sister-in-law Patty Anderson, and nieces Ingrid Hermreck, and Hannah Anderson Ortega. Terry was predeceased by his brother Larry Hillblom, in 1995; and his parents Andy Anderson, in 2006, and Helen Anderson, in 2008. Viewing will be held at Salser & Dillard Creighton Chapel, 1588 Lincoln Street, Kingsburg, CA from 3-7 pm, Monday, September 20, 2021. Rev. Johnie Thomsen will officiate at a Graveside Service to be held at 10:00 am Tuesday, September 21, 2021 at the Kingsburg Cemetery located at 12782 E. Clarkson Avenue, Kingsburg, CA. Services have been entrusted to Salser & Dillard Creighton Chapel. Memorial Tributes and condolences may be offered by logging onto www.salseranddillard.com.

Terry Clarence Hillblom Terry Hillblom passed away on September 6, 2021 in the ICU of the Community Regional Medical Center, in Fresno, after battling the COVID-19 virus for over a month. Terry was born in the small, rural town of Kingsburg,... View Obituary & Service Information

The family of Terry Clarence Hillblom created this Life Tributes page to make it easy to share your memories.

Terry Hillblom passed away on September...

Send flowers to the Hillblom family.