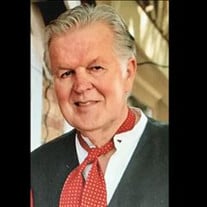 Theodore Perry Hess was born in Oak Lawn, Illinois on April 27, 1940. He went to Heaven on April 20, 2021. He was preceded in death by his parents, Alvin and Estrid Hess. He is survived by his brother Don Hess and wife Jean of DeSoto, Kansas. He is also survived by his wife of 54 years, June Olson Hess, six children, and 12 grandchildren. Erik Hess, wife Rhonda, and children Julie and Nicole of Fowler; Daren Hess, wife Yuliya, and children Anya, Dmitriy, and Anastasiya of Kingsburg; Mindy Bishop, husband John, and children Jonas, Jakob, Nathan, and Annika of Kingsburg; Troy Hess, wife Shalyn, and children Anneliese, Malcolm, and Everett of Bakersfield; Michael Hess of Fresno; Linnea Hess of Kingsburg. Ted invited Jesus into his life at the age of seven shortly after his father experienced a dramatic conversion. He grew up in Buffalo, Joplin and the Kansas City area. He graduated from the University of Kansas, became a Naval Aviation Officer, and was a navigator on C-130 transport planes during the Vietnam War, 1963-1967. Ted and June were married at Colony Covenant Church in 1966. He then joined her on staff of Campus Crusade for Christ where they led many students to a saving knowledge of Jesus Christ and helped them grow in their faith through 1971. After the family moved to Kingsburg (June's hometown) in 1985, Ted continued to counsel and encouraged June to open a Swedish gift shop. June is known for her dedication to celebrating and preserving Swedish heritage, and Ted became quite involved in the Swedish culture as well (Ted's mother was Swedish and her parents were both Swedish immigrants). Ted taught himself to play the accordion in order to accompany Swedish folk dancing. He also enjoyed singing in choirs, sailing, spending time in the mountains and at the coast. Over the years, Ted worked as an insurance underwriter, college counselor, real estate agent and Safety Supervisor at Del Monte. Ted was a devoted husband, father, grandfather but, most importantly, he devoted his life to loving and serving his Lord and Savior, Jesus Christ - in whose presence he now resides for eternity. A graveside service will be held on Thursday, April 29, 2021 at 10:00 a.m. at Kingsburg Cemetery, followed by a memorial service at 11:30 a.m. at Colony Covenant Church, 15000 E. Rose Ave., Kingsburg, CA. Services have been entrusted to Salser & Dillard Creighton Chapel. Memorial Tributes and condolences may be offered by logging onto www.salseranddillard.com.

Theodore Perry Hess was born in Oak Lawn, Illinois on April 27, 1940. He went to Heaven on April 20, 2021. He was preceded in death by his parents, Alvin and Estrid Hess. He is survived by his brother Don Hess and wife Jean of DeSoto, Kansas.... View Obituary & Service Information

The family of Theodore Perry Hess created this Life Tributes page to make it easy to share your memories.

Send flowers to the Hess family.