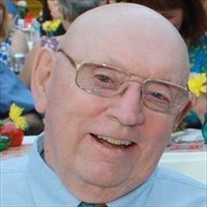 Walter Carl Engstrom passed away peacefully on August 18, 2020. He leaves behind a legacy of family, leadership, music making and long-time friendships. Wally was born on May 25, 1932 in Rockford, Illinois to Carl and Margaret Engstrom, both first-generation Swedish immigrants. In his youth he was like many young boys at the time in that he played baseball and basketball, but even more important to him was playing the trumpet, both in school and in the Salvation Army Band. His family moved to Kingsburg, CA in 1948, where Wally would reside for the rest of his life. In 1954, after graduating from Fresno State with a degree in Music Education, he married the love of his life, Barbara Jacobson, and began teaching music in various public schools around the area. After a few years, he landed a job teaching band and orchestra at Redwood High School in Visalia, and for many years that became his passion. His band appeared in many parades, halftime shows, and went on several memorable trips. The orchestra consistently gained superior ratings at festivals and played for school musicals such as Oklahoma and My Fair Lady. Eventually, Wally took on new responsibilities as Music Coordinator for the Visalia Unified School District and also as Director of Adult Education. After more than a decade in these roles, he decided it was time to retire to a life filled with traveling and relaxing with friends and family. Wally served his community in many ways, as Director of Kingsburg's Swedish Festival, as a member of the YMCA's Y's Men, as co-founder and Director of the La Sierra Music Camp, as founder of the Visalia Band Review, as Director of the Kingsburg Methodist Church Choir, as Chair of the Kingsburg Hospital Board of Directors, and for 13 years as the Director of the Kingsburg City Band, finally relinquishing the baton to his son Dale, but continuing to play trumpet in the group until well into his 70s. Wally loved his family and all the family gatherings. He was known for his happy disposition ("jolly Wally") and for his love of talking with just about anyone with whom he came into contact. He is preceded in death by his son Steve, as well as his brothers Rudy and Ken. He is survived by his wife Barbara, daughter-in-law Sheryl, sons Dale (Lucretia) and Larry (Kris), along with 9 grandchildren and 12 great-grandchildren (with another expected in December). Visitation/viewing for the public will take place on Sunday, August 30 from 2-6pm at the Salser & Dillard Creighton Chapel located at 1588 Lincoln Street in Kingsburg. Due to the current COVID-19 pandemic, a private (immediate family only) graveside service will be held at the Kingsburg Cemetery. The family is planning a celebration of life service sometime in 2021. In lieu of flowers, memorial donations can be made to the Kingsburg City Band and mailed to 2030 Mariposa St, Kingsburg, CA 93631 (checks should be made out to Kingsburg Media Foundation; put Wally in the memo and they will be posted to the city band account in his memory).

Walter Carl Engstrom passed away peacefully on August 18, 2020. He leaves behind a legacy of family, leadership, music making and long-time friendships. Wally was born on May 25, 1932 in Rockford, Illinois to Carl and Margaret Engstrom, both... View Obituary & Service Information

The family of Walter Carl Engstrom created this Life Tributes page to make it easy to share your memories.

Send flowers to the Engstrom family.