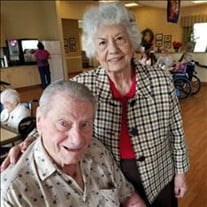 Wayne Cannon Bullis, 92, passed away on June 7, 2019 in Reedley, CA surrounded by family. He was born to Angus Bullis, SR. and Laura Bullis (Myres) in San Jose, CA on November 30, 1926. He was married to Elvera Bullis on November 8, 1952 in Merced, CA and celebrated 66 years of marriage. During the great depression Wayne grew up on the family homestead along the Merced River, walking along the Yosemite Valley railroad tracks to a one room school house in Bagby, CA for early education. He graduated from Mariposa High School in 1944 and shortly after enlisted in the U.S. Navy as a submariner in World War II on the USS Chubb. In 1950 he joined the U.S. Marine Reserves and was deployed as the first units in the Korean War conflict, operating an Amphibious Duck, Wayne saw action at Inchon landing and was disabled during the conflict. Back from the war effort, Wayne had a 35 year career as a milk and ice cream salesman for Borden, Knudsen and Berkeley Farms Companies. His hobbies included bowling, pheasant and deer hunting. Some of his fondest memories were hunting at the old deer camp on the top of Mt. Bullion with family and friends. After living in San Mateo for many years, Wayne retired and moved to Coulterville, CA where he became active in many civic organizations, such as VFW Post 9454, Odd Fellows Lodge No. 104, Northern Mariposa County Museum and the Coulterville Community Club. Wayne is preceded in death by his father and mother, his sister Laurel Shaffer of Texas, his brothers, Angus Bullis Jr. of Mariposa, CA and Lawrence and Welleyen Bullis of Texas and his grandson, Adam Bullis of Burlingame, CA. Wayne is survived by his loving wife Elvera Bullis (Gomes) of Reedley, CA. his sister, Ferne Clemmer of Napa, CA, daughter Anne Engell, his son, Jeff Bullis (Kristy), and his son Matt Bullis (Robbin). He is also survived by six grandchildren, Kelly Sika (Mark), Grant Bullis, Trina Bullis, Derek Bullis, Kyle Bullis (Erika), Scott Bullis, great granddaughter Chloe Sika and numerous nieces, nephews, friends and colleagues. A viewing will be held on June 14, 2019 at Salser and Dillard Chapel, 1588 Lincoln Street, Kingsburg, CA from 2 till 4 pm. A Mass will be held at Holy Family Catholic Church, 1275 Smith Street, Kingsburg, CA on June 15, 2019 at 10 am. Graveside services will be at the Veterans San Joaquin National Cemetery, 32053 West McCabe Road, Santa Nella, CA on June 21, 2019 at 1230pm. Tributes and condolences may be offered by logging onto www.salseranddillard.com.

The family of Wayne C. Bullis created this Life Tributes page to make it easy to share your memories.

Send flowers to the Bullis family.