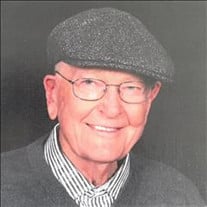 William Alfred Stewart was born September 19, 1930 to Horace and Flossie Stewart, the youngest of 5 children, in Atwood, Kansas. When he was 7 years old, his family moved to Richmond, California; then later to Manteca where he graduated from High School. After graduation, he joined the California National Guard at Stockton and proudly served his country from 1950-1956. In 1953 he met the love of his life, Helen Pankratz. They were married in Turlock and built their first home there in 1955. They were blessed with Celebrating 65 years of marriage this past year. Bill began his produce career in Turlock in 1956, also that year his first son Jim was born. In 1957, he accepted a job at Pacific Fruit & Produce Company. In 1958 he was promoted to Branch Manager and moved to Oxnard. There Sheri was born, and four years later second son John followed. Another promotion in 1965 brought the family to Kingsburg, and he later became Western Division Manager. In 1980 a new company WES PAK was formed where he was President and Director until 2000. It was gratifying to him to have both sons work with him in this company. He was well respected because of his integrity, honesty, generosity, humor and friendly personality that led to many lifelong relationships. In 2000 he was honored with a Canadian award that had never been given to a non-Canadian for outstanding contribution to the Canadian Produce Marketing Association. He also enjoyed serving 20 years on the Fresno State Ag Governing Board. A Gold Seal award from the Kingsburg Chamber of Commerce in 2009 was presented to him for outstanding citizenship and involvement in the community which he generously supported and his devoted time. He was a member of the First Baptist Church, serving as a Deacon on the Finance Board for many years. He accepted the Lord Jesus as a child, was baptized and lived his life following Christ. He was kind, loving, hospitable and always welcoming and accepting of others. Bill and Helen loved to travel in their personal, as well as business life, which took them all over the world. Early years involved camping with the family and dear friends. Later years many memorable trips to Hawaii were a favorite for them. Bill is survived by his wife Helen; his children and their spouses, James and Terri Stewart, Sheri and Jeff Baker, John and Frances Stewart; his grandchildren and their spouses, Joseph and Sophie Stewart, Samuel and Mariah Stewart, Janelle Baker, Matthew and Ashley Baker, Daniel and Justine Baker, Hannah Stewart, Natalie Stewart, Alexa Stewart, step-grandchildren Henry Sosa, Andrew Sosa; great grandchildren, Miles Stewart, Pennie Baker, Tobin Baker, Reed Baker, Annie Baker, and Luke Baker. Funeral services will be held privately. In lieu of flowers donation may be made to the First Baptist Church, 1615 Draper Street, Kingsburg, CA 93631 or KCAPS, 1139 Draper Street, Kingsburg, CA 93631 Services have been entrusted to Salser & Dillard Creighton Chapel. Memorial Tributes and condolences may be offered by logging onto www.salseranddillard.com.

William Alfred Stewart was born September 19, 1930 to Horace and Flossie Stewart, the youngest of 5 children, in Atwood, Kansas. When he was 7 years old, his family moved to Richmond, California; then later to Manteca where he graduated from... View Obituary & Service Information

The family of William Alfred Stewart created this Life Tributes page to make it easy to share your memories.

Send flowers to the Stewart family.