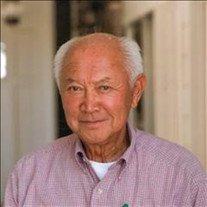 Yuk was born on November 28, 1929, the youngest of eight children born to Chito and Shotaro Hamada in Kingsburg, California. He passed away peacefully on May 24, 2020, at the age of 90. Yuk attended Harrison and Clay Elementary before the outbreak of World War II. His family was relocated to Gila River in Arizona where he spent his junior high years. Upon returning, Yuk graduated from Kingsburg High School in 1947. He attended Reedley College, majoring in mechanical engineering. It is there that he met a beautiful young lady, Iyoko ("Yonki") Sasaki. They were married on December 29, 1951. Yuk served in the Army before moving to Los Angeles to further his education. In 1953, Preston was born while Yuk was a student at University of California, Los Angeles. Upon graduating from UCLA, at his father's request, Yuk and Yonki returned to Kingsburg to help with the family farm. In 1956, Clifford was born, followed by Donna two years later. While Yuk had a real passion for farming, he often wondered what life would have been like had he chosen to pursue a different path. Eventually thinking that farming was not enough of a challenge, Yuk began a trucking company that lasted 30 years. He also had a gondola business with his sons and a tree topping business. In 1990, the Hamada Family began selling their produce at certified farmer's markets. At their peak, they sold at 35 markets a week. Yuk was never one to take on a project lightly! His work ethic was unparalleled and he was extremely generous. While Yuk was not the type of person to sit and relax, he took pleasure in restoring Model A's. He and Yonki were active members in several Model A clubs. They enjoyed outings and traveling with dear friends. In 1984, Yuk's 1930 2-Door Sedan won first place at the Concours de Elegance Show in Fresno. The family would like to thank Blossom Haven for the excellent care that Yuk received during his short stay. Yuk was preceded in death by his loving wife, Yonki, his cherished son, Preston, and all of his siblings. He is survived by his son, Clifford Hamada and his wife, Kathy; his daughter, Donna Hamada, and her husband, Jon Cochran; daughter-in-law, Gail Connelly Hamada; and his six grandchildren, all of whom he was so very proud, Megan Cochran, M.D.; Julie Hamada, C.P.A.; Andrew Hamada; Cooper Hamada; Remy Hamada; and Jason Hamada.

Yuk was born on November 28, 1929, the youngest of eight children born to Chito and Shotaro Hamada in Kingsburg, California. He passed away peacefully on May 24, 2020, at the age of 90. Yuk attended Harrison and Clay Elementary before... View Obituary & Service Information

The family of Yukio Hamada created this Life Tributes page to make it easy to share your memories.

Send flowers to the Hamada family.